When my husband and I got married – over 12 years ago – we knew directly from the beginning that it would become difficult to get healthy children. Two sisters of my husband’s had some miscarriages and a University clinic gave them the advice to have blood tests to find out the reason for it.

Directly after our marriage, my Husband had these tests and it was found that he has the same genetic defect as his sisters but in a form that he is completely healthy. It is called a balanced 13/14 translocation. It means that a part of the 13 chromosome and a part of the 14th chromosome broke off and these parts changed each other’s places. Therefore, no information was lost or more information were added, so that this translocation had no effect on the health of my husband.

The University Clinic where he had these tests invited us as a couple for a counselling interview and strictly recommended us that as soon as I became pregnant I should come and have amniocentesis before the 14 week of pregnancy. The reason was to “act” as fast as possible if the baby was disabled – meaning to abort this baby. “Only one couple was so crazy as not to come,” they said. We left this clinic and said to ourselves: ”And we will be the second crazy couple.”

Two years later I gave birth to a healthy son. We called him Mats (means “Gift of God”). After a two further years our daughter Jana (means “Grace of God”) was born – a very healthy girl, too. We were very happy and grateful for our children.

Again, two years later, my husband’s sister gave birth to a disabled child, who has an unbalanced 13/14-translocation. Parts of the 13-chromosome got lost and parts of the 14-chromosome got tripled. So some genetic information was less and some too much. She was weak, couldn’t drink properly and got a stomach tube. Furthermore, she needed oxygen and every 4 hours inhalation because her bronchial system was not very well developed. The doctors gave her a life expectation of approximately two years. (Today she is six and goes to a school for disabled children in Germany).

At the same time I had my first miscarriage in the 11 week of pregnancy and we were very sad. But we knew, that God is the creator of everything and that He is the only one who makes the decision over life and death. So it was clear for us that our child should not live on earth but was already taken to heaven to live directly with her heavenly father in peace and joy.

Four months later, I had again a miscarriage. Two weeks before the baby died in the womb we had an ultrasound examination and could already see her/him sucking the thumb, moving the legs and of course could see the beating of the heart. It was already “our” baby. One day I became quite sick and one week later it was clear that God took this child before his earthly time, too. Again, we were really sad. But we still had the impression that at least one child was missing in our family.

In 2004 I was pregnant again. Directly from the beginning I had this strange feeling (after the experiences from the last two pregnancies) that something was not ok. 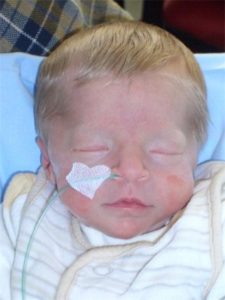 While we were on holiday I felt sick again and went to the doctor. The heart of the baby was beating and everything seemed to be fine.

But already in the 4 month of the pregnancy the ultrasound examination at the doctor’s showed that the size of the head was according to the 4 month correct, but the diameter of the body and the length of the arms and legs were too short.

The doctor and the midwife, although they knew about our family history, tried to convince us that everything was normal and healthy.

Then I got early contractions and had to rest a little bit more during the coming months. I had also the feeling that I was getting twins as my belly was much bigger than with my two first children.
Eight weeks before the birth date we spoke a clear word with our doctor that we are sure expecting a disabled child. Still, he wanted to deny it. But we urged him to send us to a clinic for further tests to make sure which clinic would be the best to give birth to a disabled child. At the end, he agreed and when we arrived at the clinic they threw up their hands in horror after they made the ultrasound examination. It showed that I had too much amniotic fluid (a twin would have fitted in the womb and normally it is a sign for diabetes during pregnancy or a genetic defect). On the other hand, the heart seemed to be not really developed and the different body parts were out of proportion. “Why didn’t you come much earlier? We are going to abort this baby, right?” We said: “Definitively not, we are looking forward to this baby!”

The doctor looked quite puzzled: “What? Are you Amish people?” (Amish are very conservative, bible-based Christians in the USA).

“No” we answered, ”We are normal Christians who believe that God is the Creator and that He is the only one who can give and take life.”Suddenly, this doctor took a deep breath and we could see what a big relief our answer was to her. She sent us to a special heart clinic and they found out that the baby’s heart was strong enough to have a normal birth.Peggy New ZealandWe found a clinic that supported us the next 6 weeks and was prepared for this birth. In these weeks of waiting we had only one day where we had tears in our eyes. We cried out to the Lord and asked Him for a living baby – and if it would live only a few minutes, we wanted to look at it, hold it, smell it and hear a few breathes. In prayers, we blessed this baby. Blessing means for us, we know the child is not our’s, it is a gift from the Lord to us here on earth. So we gave it already in our prayers back to him – His will should happen in the life of this child.
what to leave.In the preparation of the birth, we made it clear to the doctors (and they agreed), that we were not willing “to do everything” to hold this baby alive. For example, we didn’t want to allow big heart operations. We know that directly after the birth difficult decisions could rise up, but we trusted in the Lord that He would show us, what to do andAnd then came the big day… Peggy was born in the evening of the first spring day in Germany in March 2005. It was the fastest birth of all three, she was in only 40 minutes “there”. She was quite small (43 cm), but had long blond-golden hair and looked soooooo cute. 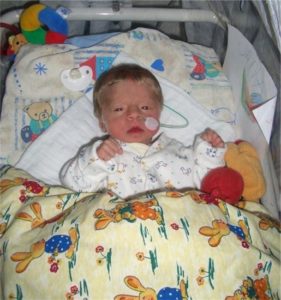 Nothing seemed to be an emergency – she leaned happily, normally breathing for 30 minutes on my shoulder. Then she came to the intensive care, as she needed 2 days of oxygen. Peggy was not able to drink by herself, so I pumped my milk and she got it through a stomach tube.

The doctors examined her over the next ten days and it was found out that the heart was almost normal. It had only two little holes. One of these holes was closed in a short operation when she was two years old.

We took her after these ten days very happily home. Through a nurse we were trained to lay the stomach tube by ourselves. For us she was soon a “normal” baby. The big brother and sister loved her right from the beginning.

Nevertheless, the next 2 years were years of a lot of support and training. Support with her digestion (as she had quite big problems with winds due to her immature intestines – all nights were several times interrupted), training to eat from a spoon, training by physiotherapists for her weak body tonus, training for her face muscles to become able to eat. She had to wear for 1 ½ years hearing aids. These first two years were quite strenuous for us, but after the event, we recognize it was it really worth.

In all these times, she was the one, who was always joyful – she was and is the sunshine of our life and of the people that get to know her.

She has been a testimony and an encouragement to so many people.

On the other hand, through her, many sad stories came and still come to light as we started to speak about the doctors who wanted to kill her. Suddenly, even in our former church, we got to know that women aborted their babies out of the same reason that they were expecting a disabled child. And they all suffered and are still suffering from this experience. Before Peggy they didn’t dare to speak about it, but God brought their pain to the surface.

Six weeks after Peggy was born the first doctor who had said “everything is normal” and the doctors from the 1 clinic confessed that they couldn’t cope with our attitude of joyfully expecting a disabled baby.

Later we got to know why: In the radio we heard a report about Germany that today 95 % of all babies who are diagnosed as disabled are aborted – killed – even one day before the birth is due.

These doctors have to face everyday the killing of babies on one hand (out of different reasons) and the hope of mothers whose babies were born too early and have to fight to stay alive.

Today, in October 2009, Peggy is 4 ½ years old. The last two years she hasn’t seen any doctors or therapists. Through prayer and normal living in our family with children around her she learned to sit up, to move forward on her bottom, to stand up and walk along furniture, to say two syllable words, to communicate through gestures and hand movements. She is able to build little towers with her wooden blocks, loves to play with her doll, and is always interested in picture books. We are starting potty training, learning to drink from a glass. Furthermore, she is the biggest helper in dishwashing. She loves to pull a little stool nearby the kitchen sink and then throw all dishes in the water (not glasses or plates for sure) and then to splash with the dish brush in the water. What loud cheers are coming out of the children’s room when the big brother and sister are playing with her hide and seek.

Her smile is the broadest you have ever seen. And…she is the most honest person we know. She is who she is – Peggy, a precious pearl.